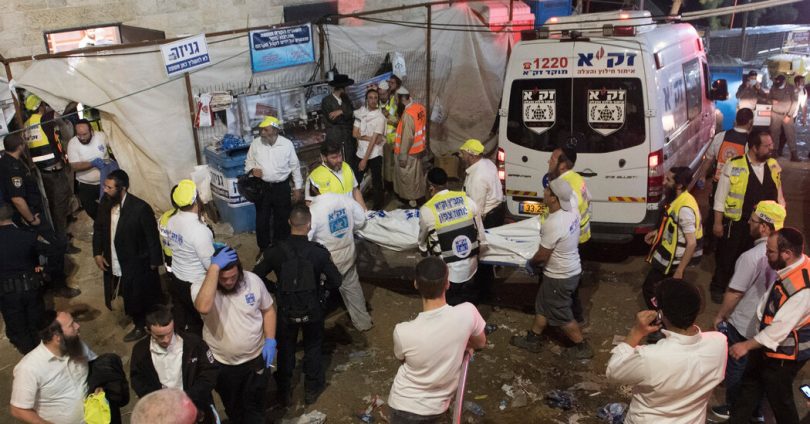 The morning after a deadly stampede on a mountainside in Israel left at least 45 people dead and scores more injured, the authorities were investigating on Friday how a joyous religious ceremony was transformed into one of the deadliest civilian disasters in the nation’s history.

By some estimates, roughly 100,000 people had thronged to the Mount Meron tomb of an ancient rabbi, the site of the annual celebration, congregating around towering bonfires that lit up the night sky in the northern reaches of the country. It was the largest gathering since the start of the coronavirus pandemic and was held despite concerns that it could fuel an outbreak.

But an evening of prayer and dancing turned chaotic around 1 a.m., when thousands of people found themselves trapped in a crush.

Witnesses described a desperate scene, as an avalanche of people surged, with adults and children caught in the maelstrom struggling for air.

On Friday morning, as the dead were laid out on the ground in body bags, the large black hats worn by some Orthodox Jewish men visible, there were many questions about what caused the stampede.

Here is what we know.

What caused the stampede?

The exact moment when the crowded event turned into a desperate struggle for survival remained under investigation on Friday.

According to witness accounts, video from the event and preliminary statements from the authorities, the flow of people through the narrow alleys around the main stage where a bonfire was lit and thousands were dancing and praying became clogged and around 1 a.m.

“It happened in a split second; people just fell, trampling each other. It was a disaster,” one witness told the Haaretz newspaper.

The situation quickly escalated, as people piled atop one another in a narrow passageway with a metal-floored slope. One of the injured, Chaim Vertheimer, said that the floor had become slippery from spilled water and grape juice.

“For some reason there was sudden pressure at this point and people stopped, but more people kept coming down,” Mr. Vertheimer told the Israeli news outlet Ynet, speaking from his hospital bed in the holy city of Safed. “People were not breathing. I remember hundreds of people screaming ‘I can’t breathe.’”

Videos showed rescue workers desperately trying to tear down metal barriers as they struggled to reach victims. Zaki Heller, a spokesman for the Magen David Adom rescue service, said 150 people had been hospitalized, with several in critical condition.

Mr. Heller told Israel Army Radio that “no one had ever dreamed” something like this could happen. “In one moment, we went from a happy event to an immense tragedy,” he said.

Two different witnesses told Haaretz that a police barricade prevented people from exiting and caused overcrowding. Television images also showed a side door in the evacuated passageway that had been locked shut.

On Friday morning, the Justice Ministry said that a police internal investigations department had begun a probe into possible criminal misconduct by officers.

How was a mass gathering allowed during the pandemic?

Last year, when people gathered to celebrate at the same site, the Israeli authorities arrested over 300 people who ignored police checkpoints.

Some were reported to have thrown stones and other objects at police officers who tried to control the crowd.

But the country’s swift inoculation campaign and plummeting infection rates have allowed it to take rapid steps back toward normalcy in recent weeks. Earlier this month, Israel lifted its outdoor mask mandate and fully reopened schools for the first time since September.

About 56 percent of the Israeli population had been fully vaccinated for Covid-19 as of Thursday, according to a New York Times database.

The pilgrimage was held this year despite warnings from Israeli health officials that it could lead to coronavirus cases — a danger heightened by the fact that some parts of ultra-Orthodox communities have been hesitant to get vaccinated.

A police spokesman told Israeli news media that overall capacity at Mount Meron was similar to previous years but that this time bonfire areas were partitioned off as a coronavirus precaution. Religious leaders suggested on Friday that those precautions might be partly to blame for the disaster.

On Thursday, before the stampede, the Israeli police said they had arrested two people for disrupting officers’ efforts to keep order at the site. But the crowd was so vast, the police said, that they could not make people obey coronavirus restrictions.

Prime Minister Benjamin Netanyahu, who traveled to the site on Friday, promised a “thorough investigation.”

“The Mount Meron disaster is one of the worst to befall the State of Israel,” he wrote on Twitter. “What happened here is heartbreaking. There were people crushed to death, including children. Many of those who died have not yet been identified.”

The authorities had warned of safety issues at the site in the past.

For more than a decade, there have been concerns that the compound at Mount Meron was not equipped to handle tens of thousands of pilgrims.

In 2008 and 2011, Micha Lindenstraus, then the state comptroller, published reports that warned of the potential for disaster.

The compound itself includes several large gathering grounds with bleachers and stages, connected by a series of alleyway and other paths.

The 2008 comptroller report noted that “all of the building additions and changes made to the tomb site and around it had been done without the approval of the local and district planning and building committees.”

“There are no grounds for permitting the current situation to continue,” one report read.

The comptroller’s office said that special danger was posed by the access roads and paths, which “are narrow and not appropriate to accommodate the hundreds of thousands of people who visit the site.”

It was along one of those paths where witnesses said the crush of people began.

Why did tens of thousands flock to the tomb of an ancient rabbi?

Every year, tens of thousand of believers make an annual pilgrimage to the tomb of a second-century sage, Rabbi Shimon Bar Yochai, on the slopes of Mount Meron in northern Israel.

The rabbi was among the first to publicly teach the mystical dimension of the Torah known as the kabbalah. The holiday, Lag b’Omer, features the lighting of bonfires to represent the spiritual light that can be found within the mystical teachings of the Torah.

The holiday is also linked in Jewish tradition to the Bar Kokhba revolt against the Romans in the first century A.D.

While the holiday is marked by the faithful around the world, pilgrims travel to Mount Meron in the hope that they will receive the blessings of the rabbi on the anniversary of his death.